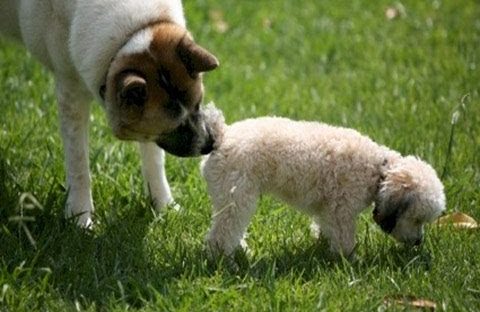 Today I am feeling inspired to share my insights on shit-testing.  We have all done this at times in our relationships – and often without realising it – with friends, family and partners.

Some of you may have heard me mention in the past the little champ I used to work with tutoring/home-schooling. I will call her Simone although this is obviously not her real name. When I first began working with her she had just turned 7 years old and her past was more harrowing than anything I could have imagined.  Having been removed from her birth parents home at a young age and then bounced around from foster home to foster home and facing the usual string of abuse, she had seen more than her fair share of trauma by the time I met her.  Just prior to this she had been told that finally a family were going to adopt her – a ‘forever family’ at last.  Heartbreakingly though, just 7 weeks in, and that family decided they just couldn’t cope with her extreme behaviour and backed out of the adoption.  Another cruel blow.  So when the next family stepped in to adopt her, she was even more on guard and ready to push them away before facing the next round of imminent abandonment.  Luckily this family were in it for the long haul and no amount of frightening behaviour was a match for their overwhelming love and acceptance.

While she was adjusting to the new family and location, she was not in school and I was given the role of being her 1:1 teacher every day in her home.  I had been pre-warned about some of what she’d been through and to expect violence and outbursts.  Surprisingly though. We got almost 2 weeks in with very little incident.  Sure there were times of defiance, requiring patience and negotiation as she attempted to control the situation and learning, but mostly she took to me really well and we had a great connection and understanding.

Fast forward a fortnight and as we sat down to do a standard maths game that she had grown to enjoy and without warning she leapt up and started scratching and slapping me.  At first I was confused as there was no trigger or confrontation immediately prior.  I could tell from the way that she was looking at me that she was doing it to see what sort of response she would be getting and how I would react.  I somehow managed to divert her sudden surge of physicality into a civilised light-hearted arm wrestle at the table.  As this was unfolding, I could hear in the back of my mind my years of experience as a teacher the warning of “under NO circumstances is it okay to touch or have any physical contact with a child”.  Despite my mind screaming at me to follow the rules, my instincts told me that she was fired up and an arm wrestle was the most harmless way to divert this sudden outburst.  It felt like any other action would have served only to escalate the situation. So despite my regulatory fears, I trusted my instincts and thankfully, it worked.  As much as it went against the rules, what I was facing I sure didn’t remember reading in any teaching manual either!

After the situation had de-escalated and I had debriefed with her Mum and headed home, I reflected on why this had happened.  My first thought was one of disappointment.  I thought we had been making great progress in our rapport – but maybe I was wrong?  Perhaps she really didn’t trust me or my way of teaching?  But once I got those unhelpful thoughts out of the way I was able to see the situation for exactly what it was – a shit-test.  Why was Simone shit-testing me in that moment?

It actually is quite simple and makes a lot of sense.  Part of her was ready to let me in and trust me at a deeper level now.  We’d had a few weeks together, she was starting to really trust me.  But she had clearly trusted and then been let down by adults time and time again already in her short life.  They had been nice to her but then as soon as she’d shown them her worst behaviour they had responded with anger, shame or just completely abandoning her altogether.  So before she was ready to fully let me in, her ego needed to know that I would still be there and not judge her or come with anger or shame no matter how she was showing up.

The most priceless thing I was ever taught during my teaching studies, was to, wherever possible “give the child what they need not what they deserve”.

In this case it would have been easy to feel outraged by Simone’s behaviour, but the power and gift (for both teacher and student) comes with understanding why they are behaving that way, what they are secretly looking for, and then giving them that.  Don’t get me wrong, this is a fine line.  Obviously Simone and I (in partnership with her Mum) had a solid chat afterwards about appropriate behaviour and strategies in place for it to not happen again.  The behaviour was not condoned or accepted, but rather dealt with in a way that allowed her to see that no matter what she did, I wouldn’t be getting angry or abandoning her – which proved to be a very important step for cementing our student-teacher relationship.

So how does this relate to adults?

Well we all still have an inner child!  Even as adults, we still harbour fear-based programs or beliefs at a subconscious level that we formed during childhood. Here is an example to further illustrate:

Jenny had her Father walk out on and abandon the family when she was 4 years old.  As a result, she formed the belief and has been running the program ever since of “men are never there for me and will always leave me eventually”.  As a result of carrying this belief (totally unconsciously!), she has attracted situation after situation her whole life proving that program, with men never being there, abandoning her in relationships, friendships and so on.

Let’s just say Jenny is now 30 years old and starts dating someone new.  Having experienced that initial trauma of being abandoned by the masculine, she has then subsequently had relationship after relationship reinforcing that belief ever since. But this new guy… he seems different. He doesn’t seem like all the others and he seems really into her… it even feels like he could be The One that she has been waiting for all this time. But then just a few weeks into the relationship and the little girl within her starts to get scared…

Her internal dialogue starts throwing up things like “Well okay, this guy seems great, but this is a bit scary.  To let ourselves get in any deeper and then have him up and leave like all the others? That would be too painful.  Before we go all in, lets just run a few tests now to make sure he really truly never will leave and we can feel safe to trust in this relationship…”

And then the ego (still talking to itself) concocts clever (or sometimes not so clever!) plans to push him away.  Maybe it’s to treat him like shit and see if he still stays around, maybe its to start talking about exes or flirting with other guys.  All of these things are set out as a test to see how much he really does care and whether he will still stick around – even if you dish up your worst!

Most of the time all of this is unfolding without Jenny having any conscious awareness over it whatsoever.  This is the power of the sub-conscious sabotage.  So let’s look at the potential outcomes as a result of this test:

Now this is an extreme example obviously.  Not everyone has the intensity of abandonment program that Jenny does, however many  do have variations of this program – and some even worse. This is why it is so important to truly get to know yourself, gain an understanding over your programs and beliefs.  Because simply just having an awareness of these (and therefore how you are subconsciously expecting someone to show up) is a massive head start to preventing these sabotaging programs coming in to play.

I would invite you to ask yourself now, how do I push people away (in friendships or relationships?).  And whatever you do – remember that knowledge is power! Don’t judge yourself – you are only doing it through fear of being hurt.  But the more honest you can be with yourself, the easier you will find it to be aware of your own saboteur and therefore call it on it’s antics.  Once you have identified how you push people away, ask yourself what you are trying to protect yourself from by doing so?  Then follow it up with “when did I first form this belief and/or who’s voice is that I am hearing?”.

In Jenny’s case she pushes men away by talking excessively about Exes and dishing up her worst behaviour to see if they will stick around.  She does this to test if they are going to push past her beliefs and prove her programs wrong (and thus showing her that it is safe for her to trust them).  The trouble with this is that as much as part of her is looking for him to push past this test, at a deeper level she holds such a strong belief around men ultimately not being there for her, that even If he does survive ‘Round 1’, until she gains awareness over her subconscious drivers, she will continue to run tests and create a reality that supports her underlying belief. Ultimately the little girl in Jenny is just trying her hardest to prevent Jenny from ever experiencing the pain of that abandonment again.

As painful as this cycle of rejection and abandonment from the masculine is, in a way it becomes comfortable for Jenny – as it’s all she’s ever known.  Not only that, but by keeping men at arms length and never truly allowing them in to love her, it allows the little girl in her to never have to face the stark reality that her Dad could never love her the way she wanted to be loved.  This is called the ‘ego dichotomy’… it does take a bit to get your head around that so I will go into more detail on that another day 😉

I look forward to hearing what insights or realisations you come to from doing this exercise and as always, give me a shout if you have any further questions!

View all posts by Amber Farrington